(SEOUL=Yonhap News) The Korean government said Monday it will focus on attracting more visitors from Southeast Asia as part of its efforts to diversify its tourist portfolio after it suffered a sharp drop in inbound foreigners in the face of a diplomatic row between Seoul and Beijing.

The government will concentrate its policy efforts on promoting the country's tourism to people from Indonesia, Vietnam and India, as well as those from Taiwan and Hong Kong, and seek ways to simplify their entry into the country, the Ministry of Culture, Sports and Tourism said after a pan-government meeting convened by Prime Minister Lee Nak-yon.

Korea's tourism industry took a hit following China's decision to ban the selling of Korea-bound tourism packages since March in an apparent retaliation against the deployment of a U.S. anti-missile system here.

Chinese nationals accounted for nearly half of the 17 million foreigners who visited the country last year.

Late last month, Beijing decided to partially lift its prohibition as the two countries moved to repair their bilateral ties, but industry watchers say it will take some time for Chinese tourists to actually return in large numbers.

In order to entice Chinese inbound tourists, the government last month announced a temporary visa-waiver for those who fit a certain criteria set by the government.

The no-visa policy is tied with the 2018 PyeongChang Winter Olympics slated to run in February. A Chinese national with tickets to the Winter Games worth more than 200,000 won or US$184 can enter Korea without a visa and stay up to 15 days. Moreover, the policy is valid within five years, offering an incentive for Chinese tourists to come back.

Emphasizing the importance of the Chinese market, Kim Jang-ho, director at the ministry's International Tourism Division, said during a separate media briefing organized by the ministry: "This policy is to pump up the number of Chinese visitors in the short term as the Chinese market has suffered too much this year."

"In the long term, we plan to focus on improving the quality of tour programs, rather than obsessing with the numbers," he added.

During Monday's meeting, the government also decided to prepare more high-value tour programs for foreign visitors to seek a qualitative growth, according to the culture ministry.

Other promotion measures include developing packages in connection with "hallyu," the Korean Wave of popular culture, expanding the area of medical treatment, and increasing facilities for cruise tours, the ministry said. 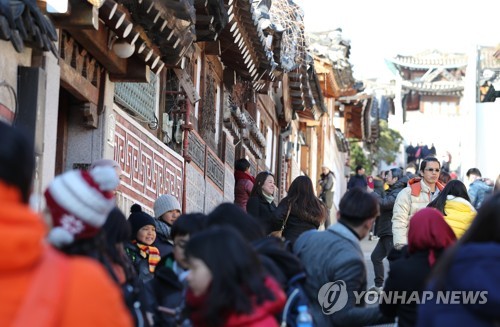 Foreign tourists bustle around in an alley of traditional Korean houses at Bukchon Village in Seoul despite the cold snap on Dec. 8, 2017. (Yonhap)