In a meeting with officials at a electric vehicle parts maker, west of Seoul, Finance Minister Kim Dong-yeon said the government will listen to voices from various industries.

Last month, the government unveiled a plan to inject a combined 30 trillion won in the next three years to foster innovative startups and venture firms in a way to create a virtuous business cycle and secure a new growth engine.

Under the plan, the government will focus on expanding the money supply for fledgling enterprises and creating a generally venture-friendly environment.

It will first create a 10 trillion won fund in the coming three years to help innovative venture firms get necessary investment from the outset.

The finance minister also stressed mutual prosperity between large firms and smaller ones adding that it will continue to push for deregulation.

Kim's visit to a firm marks the second meeting of its kind with local businesses.

Earlier this month, the minister held a meeting with senior officials from LG Group, a chemical and electronics conglomerate, to get the business circle's voice.

In July, President Moon Jae-in invited chiefs of the country's major conglomerates to exchange views on how to generate more jobs and other key issues, such as the coexistence of large and small companies.

The finance minister said the government will continue to arrange meetings with the business community to listen to their demands.

The finance minister said auto-parts manufacturers have promised to invest a combined 10 trillion won over the next five years, that can create some 20,000 jobs, with the government moving to maintain its subsidy program for electric vehicle purchases.

As to economic ties with China, he hopes that bilateral economic relations will improve moving forward. 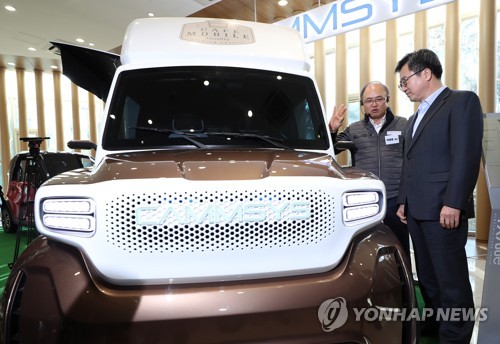