A Korean startup has raised $16 million in fresh funding from Silicon Valley, the first Korean company of its kind in recent years to attract a multimillion-dollar funding in the U.S.

SendBird, an in-app messaging solution provider headquartered in Redwood City, said its first round of financing, or series A funding, was led by Shasta Ventures and August Capital along with existing investors FundersClub and Y Combinator.

An early stage investment of more than $10 million is dubbed a “mega series A funding” and is significant as a company with such backing is seen to be on course to become a unicorn, a startup with $1 billion market value.

Founded in Korea in 2013, SendBird is a startup whose core product is a messaging software development kit enabling companies to easily mount chat functionality on their apps and websites. Staffed with 17 Koreans and nine Americans, the company has been showing rapid growth with its revenue jumping more than twentyfold after its relocation to Silicon Valley in 2016.

SendBird has been trying to diversify its client base, reaching out to Southeast Asian firms such as Singapore’s marketplace app Carousell and Indonesia’s leading mobility app Go-Jek and travel app Traveloka. Its clients in Korea include KB Kookmin Bank, Shinsegae Group, Coinone and Nexon.

“We have developed one of the world’s most scalable and modern chatting infrastructures,” said a SendBird official. “We plan to use the venture capital to recruit new talent and expand our services to chatbot platforms. 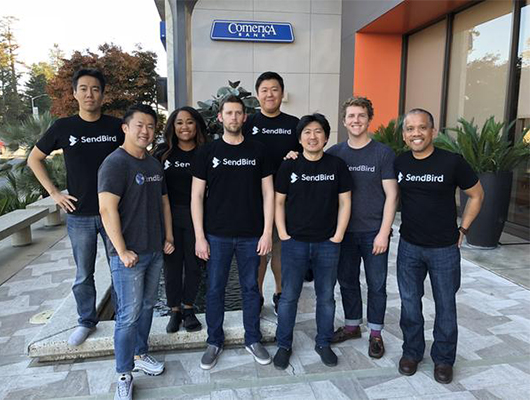 By Sohn Jae-gwon and Kim Hyo-jin