Nongshim to launch JV in Korea with Japan’s Ajinomoto
Date
2017.12.26
Views
755
According to Pulse by Maeil Business News Korea,

Under the agreement, Nongshim and Ajinomoto will set up a joint production company called Ajinomoto Nongshim Foods and build a production facility for dry instant soup products in Korea by 2019. The agreement was signed at Ajinomoto’s headquarters in Tokyo, Japan.

Nongshim and Ajinomoto will invest a total 13 billion won ($11.9 million) based on equity ownership of 49 percent and 51 percent each. The joint production company will break ground for the new manufacturing facility in Nongshim’s distribution center in Pyeongtaek, Gyeonggi, in the first half of next year.

The company plans to enhance its dry soup product line up and develop products appealing to the palates of Korean consumers, an official said.

Nongshim has been retailing Ajinomoto’s instant soup brand Vono in Korea since 2006. Sales of Vono soup has grown by more than 30 percent in recent five years on average with annual sales reaching 17 billion won.

Japan’s Ajinomoto founded in 1909 is a global total food company with more than 100 years of history. It is engaged in the global sale of condiments as well as bio and medical items. The company - headquartered in Kyobashi, Tokyo - has overseas subsidiaries in about 30 countries and raises 10 trillion won in annual sales. Ajinomoto soups have high brand power in Japan, accounting for more than 60 percent of the market. 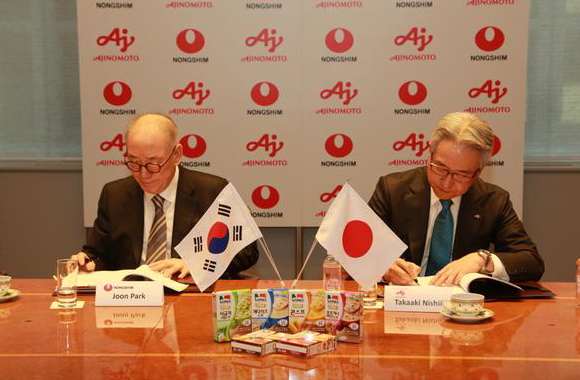 By Lee Hee-soo and Lee Eun-joo