(SEOUL=Yonhap News) Korea's cosmetics industry is looking to regain growth in 2018 after taking a big hit from China's retaliation against Seoul over a missile row this year, sources said Thursday.

In March, China banned sales of group tours to South Korea in retaliation against Seoul's decision to deploy an advanced U.S. missile defense shield, which Beijing sees as a security threat.

The move has dealt a big blow to South Korean cosmetics manufacturers and retailers, whose main customers were Chinese tourists.

The dismal records marked a drastic turnaround from its stellar performances over the past years. The company had registered double-digit growth in sales and operating profit in recent years.

LG Household & Health Care Ltd., Korea's No. 2 cosmetics and household goods maker, was no exception. In the wake of China's retaliation, its sales edged down in the second quarter after renewing records each quarter.

But its sales climbed 2.9 percent on-year to 1.6 trillion won in the third quarter and operating income gained 3.5 percent to 252.7 billion won as the portion of cosmetics to its business portfolio is low.

Industry watchers predicted cosmetics companies to recover their growth pace in the coming year thanks to efforts to diversify markets and launch new products.

AmorePacific and other industry players have resumed their marketing activities in China by rolling out new products and ramping up efforts to meet the diverse needs of Chinese customers.

Sources said Korean cosmetics makers' efforts to tap into new markets, such as Vietnam, the United States and Europe, may boost their competitive edge down the road.

In contrast to the slump of the cosmetics industry, local health and beauty stores, the local version of drugstores, have posted solid growth this year.

The health and beauty sector has been growing at an annual average rate of 22.5 percent over the past five years, with the market size expected to reach 2 trillion won this year. Market leader Olive Young, run by CJ Group, saw its sales jump to 1.1 trillion won last year from slightly over 300 billion won in 2012. 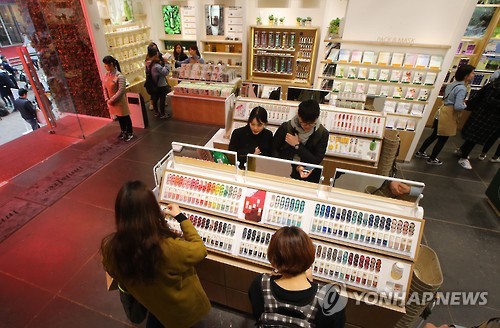