(SEOUL=Yonhap News) Korea plans to create 30 million square meters of seaport hinterland by 2030 as part of a broader development plan to enhance the country's industrial and logistics infrastructure, the government said Monday.

According to the Ministry of Oceans and Fisheries, new hinterlands will be set up in eight ports that are of a certain size and capable of handling 10 million tons of cargo annually.

The ports are Busan, Incheon, Gwangyang, Pyeongtaek-Dangjin, Ulsan, Pohang, Mokpo and Masan. These ports can, moreover, handle 2,000 twenty-foot equivalent unit class container ships and have a 240-meter general cargo wharves. The ports have also secured at least 300,000 square meters of land for development.

Under the latest port hinterland project, which follows those announced in 2006 and 2012, the government has placed an emphasis on securing manufacturing and logistics-related land to improve the overall investment environment especially.

The ministry said that up to the target year, 1.5 trillion won will be injected into the effort, generating as much as 11.9 trillion won worth of production inducement effects and creating 87,000 new jobs.

"The latest move will expand the country's port and logistics infrastructure, as well as create more jobs," a government official said. 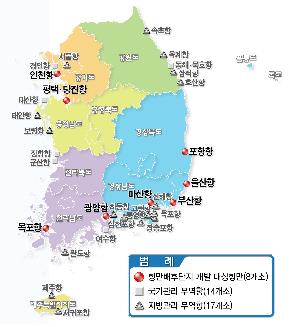