Kim Young-choon made the remark one day after visiting Daewoo Shipbuilding & Marine Engineering Co.'s shipyard in Geoje, some 450 kilometers southeast of Seoul, to check the progress on the construction of ice-breaking liquefied natural gas (LNG) carriers. The Korean shipbuilder delivered two Arctic carriers for the Yamal LNG project in November and 13 others are currently being built at the shipyard.

"We have to step up economic cooperation with Russia by engaging in development projects in the country's Far East region," Kim said in a meeting with reporters.

The Russian Far East covers 36 percent of the country's territory but has less than 5 percent of its population. About 65 percent of all Russian marine products come from this region, despite it having generally poor infrastructure.

Kim vowed support for building a seafood processing complex in the Russian Far East and the modernization of the Zvezda shipyard there, while seeking ways to jointly develop Russian Arctic shipping routes.

The latest move is part of President Moon Jae-in's "New Northern Policy," which aims to set up a vast economic region that would encompass from the Korean Peninsula and the Russian Far East to Northeast Asia and Eurasia. 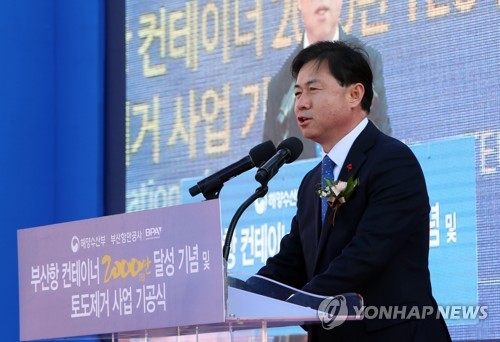 Kim Young-choon, minister of oceans and fisheries, speaks during an event held at Hanjin Shipping's container terminal in Busan, the nation's largest port city on the southeastern coast, on Dec. 26, 2017. (Yonhap)