(SEOUL=Yonhap News) Korea is expected to benefit from China's rapidly growing service industry if the two countries agree to upgrade their bilateral free trade agreement (FTA) to include the service and investment sectors, experts said Friday.

Korea and China implemented the FTA in December 2015 and recently agreed to launch follow-up negotiations to expand the scope of the trade deal to lower barriers in the service and investment sectors.

Experts and industry officials expressed hope that a high-level market opening in the sectors would boost chances for Korean companies in the entertainment, travel, education and medical sectors of the world's second-largest service market.

"Opening the goods market is a starting point, while opening the service market is a destination," Chung Whan-woo, a senior market researcher at the Korea Trade-Investment Promotion Agency (KOTRA), said during a public hearing held at the Convention and Exhibition Center in Seoul. "The government should come up with proactive measures to help (South Korean companies) enter the rapidly growing Chinese service industry."

China has been reducing its focus on manufacturing to restructure toward a service-based economy. China's service industry weighed in at US$5.6 trillion in 2016, making up over 50 percent of gross domestic product (GDP) for the second year in a row. The world's No. 2 economy aims to get that number up to 70-80 percent, the average for advanced industrialized economies.

Since Korean companies have grappled with non-trade barriers like investment restrictions and regulations, Chung said follow-up negotiations would pave the way for easier access to a market of 1.4 billion Chinese consumers.

The expert recommended that the government pay keen attention to emerging technology sectors, including e-commerce, the sharing economy and mobile payments, to reflect the latest industry trends.

Sung Han-kyung, an economics professor at the University of Seoul, said further opening of the service and investment market would increase China's foreign direct investment to South Korea by 36.3 percent.

"It would have a positive effect on the Korean economy by increasing real gross domestic product, trade and investment," Sung said.

As a precondition to discuss the market opening in the service sector, the two sides should come up with effective investor protection measures to create a stable business environment for companies.

China's foreign direct investment to Korea logged $2.04 billion in 2016, but it tumbled 60.5 percent to $809 million last year due to Beijing tightening control on foreign exchanges to curb capital outflow and strained diplomatic ties in the wake of Seoul's deployment of an American missile defense system.

"The two sides should clearly note additional market opening in the agreement and include systemic mechanisms to prevent governments from arbitrarily strengthening local regulations in the future," Sung said.

Online retailers demanded lower barriers in the e-commerce trades with China to foster global players like Alibaba and Tencent.

"The government needs to vitalize the digital single market with China to cash in on the Korean Wave," said Kim Yoon-tae, the vice president of the Korean Online Shopping Association. "To lay the groundwork for entering the growing Chinese market, the two nations need to discuss ways to prepare a safer transaction system and consumer protection measures."

Game developers called for the government to provide easier access to the China's heavily restricted game market, which took over the United States to become the largest in 2017.

"While Chinese companies can invest in Korean game companies, the opposite case is not allowed because of China's regulations," Lee Han-beom, a senior official from Smile Gate, a local game developer, said. "We hope the follow-up negotiations to allow Korean companies to directly enter the Chinese market to save time from acquiring licenses and other regulations."

The Ministry of Trade, Industry and Energy said it will reflect on opinions from the hearing to set up a negotiation strategy and communicate its plans to the National Assembly before opening talks in the coming months. 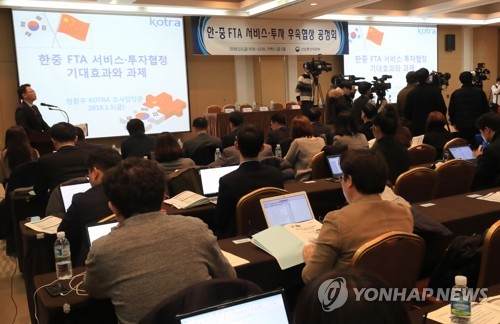 The Ministry of Trade, Industry and Energy holds a public hearing on the follow-up negotiations of the free trade agreement with China to include service and investment sectors at the Convention and Exhibition Center in southern Seoul on Jan. 5, 2018. (Yonhap)