(SEOUL=Yonhap News) Korean tech firms are set to utilize the PyeongChang Winter Olympics slated for next month to promote their achievements in the field of information communications technology (ICT), industry watchers said Tuesday.

The 2018 PyeongChang Olympics will be an opportunity for Korea to boost its presence in the fields of fifth-generation (5G) networks, artificial intelligence, virtual reality, and robot technologies, they said, paving the way for audiences around the globe to enjoy vivid broadcasts of the Winter Games.

KT Corp., the official sponsor of the PyeongChang Olympics and South Korea's No. 2 mobile carrier, plans to showcase the world's first 5G broadcast of the games and deliver video content that rotates 360 degrees for VR headsets.

The 5G network is expected to revolutionize the broadcasting industry as it is capable of delivering massive data needed for VR or hologram services. Its transmission speeds are 40 to 50 times faster than current long-term evolution (LTE) networks.

KT said that, much as the 1964 Summer Olympics in Tokyo first introduced satellite broadcasting in color, the company will open a new era for the ICT industry through the 2018 Winter Olympics on the back of the 5G network.

"Through demonstrations of 5G network technology in PyeongChang, we will better prepare for its official commercialization," KT's head Hwang Chang-gyu said in a statement earlier this year.

Utilizing the technology, KT said it will provide what it calls "time-slice" services for the figure skating competition during the Olympics, which captures athletes from various angles in a standstill view.

The “Sync View” service, applied for bobsleigh, will also broadcast the event as seen through the eyes of athletes.

Electronics and Telecommunications Research Institute will also showcase “GenieTalk,” the official interpretation and translation application for the 2018 PyeongChang Olympics. Based on artificial intelligence technology, the app supports some 29 languages, including English, Chinese, Japanese, French and Spanish.

Future Robot Co. will also operate robots equipped with the app at event venues, providing assistance to visitors from around the globe.

Organizers said there will be a total of 85 robots at the venue tasked with offering various information for visitors, such as details of game schedules and tips for tourists. The robots will be assigned to the Main Press Center and Olympic Village, along with various corners. 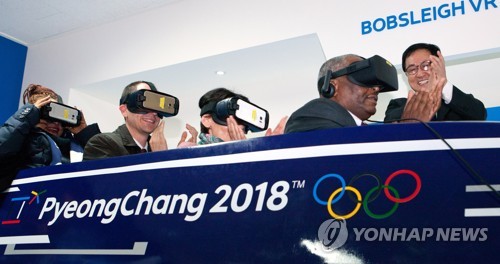 Visitors enjoy a demonstration of a virtual-reality simulator at a ICT center in PyeongChang in this file photo taken on Dec. 7, 2017. (Yonhap)