(SEOUL=Yonhap News) Korea ranked eighth among 15 major economies in the frequency of citations of patents registered with the U.S. patent authority in 2015, a report said Thursday.

The ranking in the Hirsh index is up from 14th in 1976, according to the report written by Lee Jee-hong, a professor at Seoul National University, and several others that was published by the Bank of Korea (BOK) Economic Research Institute.

The index measures the impact of the publications of scholars based on the number of citations they received in other publications.

The report analyzed more than five million patents registered with the United States Patent and Trademark Office (USPTO) between 1976 and 2015.

The United States and Japan have ranked first and second each during the period while Korea, Taiwan and Israel have all made the top ten since 2000.

Korea, however, has lagged behind in innovation in information technology software, medicine and biochemistry for 10 years until 2015, the paper said, noting patents in those areas have been rapidly registered in the past decade as the core technology for the fourth industrial revolution. 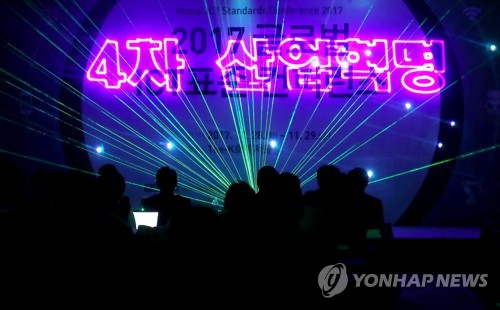 A file photo of a seminar on the fourth industrial revolution. (Yonhap)