(SEOUL=Yonhap News) President Moon Jae-in promised all-out effort Tuesday to support small and medium-sized enterprises (SMEs), saying his top priority was to allow them to work in a fair environment.

In a special meeting with top executives and officials from local SMEs and venture firms, the president said the government was also moving to discontinue the use of promissory notes as a way of payment by large conglomerates, a practice long blamed as a cause of liquidity shortages for already cash-strapped SMEs.

"My new year's wish in the economic sector is to make SMEs the center of our economy and to allow small business owners to do their business in a fair environment," the president told the meeting, which was attended by 26 small business leaders, including six venture firms. The dinner meeting at the presidential office Cheong Wa Dae also involved the heads of six business organizations for SMEs, such as the Korea Federation of SMEs.

"We will gradually abolish the promissory note system that has been a source of causes for reduced liquidity of SMEs," Moon said, according to Cheong Wa Dae pool reports.

Tuesday's meeting marked the first of its kind between Moon and small business owners.

The president held similar meetings with the heads of large conglomerates and labor organizations shortly after he took office in May, but the meeting with SME leaders was delayed because a new venture minister had not yet been named. Hong Jong-haak was appointed minister of SMEs and Startups in late November.

Moon highlighted the importance of SMEs, noting they were responsible for most jobs and income among citizens.

"Since last year, the government has been working to shift the paradigm of our economy to a people-oriented economy. This was to make sure the benefits of economic growth will reach all of our people and not just large export companies," he said.

The president earlier noted that 3.54 million SMEs accounted for 99 percent of all private businesses and 88 percent of employment in the country.

"Again, the government will push forward such policy initiatives without fail this year. In addition, it will focus on making sure its key policies can be felt by SMEs in the field," he said.

Government support for SMEs will include financial incentives for new jobs they create, the president noted.

The government will also help turn the existing production facilities of SMEs into smart factories.

President Moon noted the recent spike in the minimum wage may have especially placed a heavy burden on small shop owners and SMEs, who mostly rely on low-wage workers, but he insisted it was a necessary change to ensure the growth, as well as survival, of the local economy, including the SMEs themselves.

"A minimum wage hike is what we must have to reduce polarization, ensure humane lives of low-income workers and enable income-led growth. Once the minimum wage increase makes a safe landing, domestic demand will expand, as it will increase spending and our economy will improve. Eventually, it will help SMEs and small shop owners as well," he said.

The president said the government was also set to announce additional support measures for SMEs in the near future that will include a reduction in credit card processing fees for small shops. 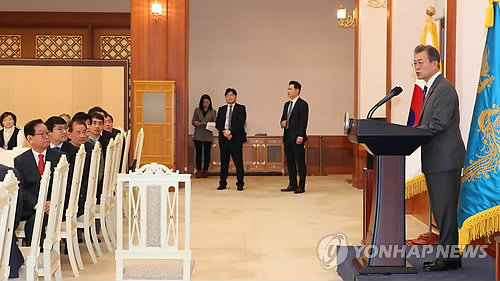 President Moon Jae-in (R) speaks in a meeting with executives and officials from small and medium-sized firms held at his office Cheong Wa Dae in Seoul on Jan. 16, 2018. (Yonhap)