(SEOUL=Yonhap News) Korea's exports to Vietnam have been growing in leaps and bounds, the size of the trade surplus for the Seoul side surpassing that with the United States, a trade body said Thursday.

Last year's data from the Korea International Trade Association (KITA) showed South Korea exported US$47.7 billion worth of products to Vietnam, accounting for 8.3 percent of the country's entire outbound shipments. The increase is notable compared with just three years ago when Vietnam-bound shipments accounted for 3.9 percent of Korea's exports.

Vietnam is quickly catching up with the United States as the preferred export destination for Korea, KITA's data indicated. Korea exported $68.6 billion, or 12 percent of the total, to the U.S. last year. In terms of monetary value, shipments to Vietnam equaled 69.7 percent of that to the U.S. for that year.

Big name Korean companies like Samsung Electronics and LG Electronics have been setting up their production bases in Vietnam, boosting the trade volume between the two countries, trade analysts say. A bilateral free trade agreement that went into effect in December 2015 has also helped, they say.

An export products list showed semiconductors at the top with $9.2 billion, followed by flat panel displays and sensors at $7.4 billion, and mobile communication devices at $3.3 billion.

"The increase in exports to Vietnam will likely continue based on semiconductors and displays from advanced specifications of IT devices and growth in the electronics industry," Moon Byung-ki of KITA's international trade research office said. "But the local supply of raw materials is also growing, so the pace of the increase in exports may slow down," Moon said, which would require Korean companies to develop core high value-added materials and parts. 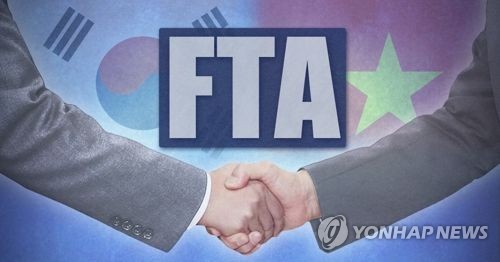