(SEOUL=Yonhap News) The total amount of investment in startups reached a record high 2.38 trillion won (US$2.23 billion) in 2017, government data showed Monday, as venture capitalists continued to pour money into businesses on hopes of lucrative returns.

The amount is up 10.7 percent from the 2.15 trillion won tallied a year earlier, according to the data from the Ministry of SMEs and Startups. It marked the fifth consecutive year that the tally reached a new record high.

The ministry said 779.6 billion won, or 32.7 percent of the total, went to companies set up within the last three years, while 664.1 billion won, or 28 percent, was invested at firms between three to seven years old.

A total of 1,266 companies were invested in, with an average amount of 1.88 billion won, according to the ministry.

By sector, the information and communication technology (ICT) service accounted for 21.6 percent of the total investment, followed by retail businesses with 17.6 percent and the bio and medical sector with 16 percent, the ministry said.

The latest surge in venture investment is in line with the government's push to develop new growth industries and support small and medium-sized enterprises (SMEs).

The Moon Jae-in administration has been focusing on boosting burgeoning industrial sectors such as self-driving cars, drones, robots and financial technology, or fintech.

Last week, President Moon called for swift measures to remove unnecessary and excessive regulations, calling them a major hurdle to a new start for the country's economy. 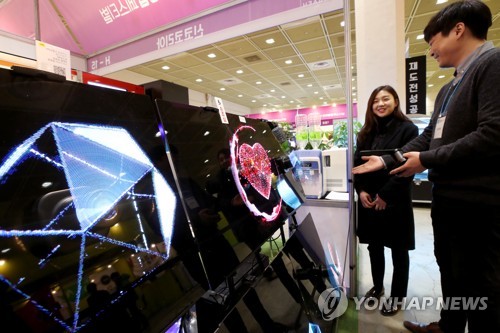 In this file photo taken on Nov. 30, 2017, participants in Startup Festival 2017 look at an LED spinner at the Convention and Exhibition Center (COEX) in southern Seoul. (Yonhap)