Outbound shipments came to US$49.21 billion for January, up from $40.25 billion a year earlier, according to the data compiled by the Ministry of Trade, Industry and Energy.

Exports rose for the 15th month in a row, posting double-digit growth for the first time in four months.

Korea's trade surplus came to $3.7 billion, marking 72 straight months in which the country's exports have exceeded imports, the ministry said.

Exports grew at a brisk pace despite a high base effect last year, when Korea's exports reached an all-time high of US$574 billion fueled by an upturn in global demand.

General machinery cashed in from the rising infrastructure investment in the U.S. and China, as well as from resource development projects in Southeast Asian nations.

"Korea's exports rose on the back of the global economic recovery and the booming manufacturing sector, helped by a rise in oil prices and higher margins of major export items," the ministry said in a statement.

By region, sales in China, Korea's biggest export destination, gained 24.5 percent on-year to mark a sixth consecutive month of growth, and shipments to Southeast Asian nations jumped 37.2 percent on the infrastructure boom and demand for IT products.

Exports to the U.S. climbed 4.8 percent last month, swinging back to growth from December's 7.7 percent fall, as an upturn in demand for general machinery and petrochemical products offset sluggish auto sales.

The trade surplus with the U.S., however, tumbled 67 percent on-year to $320 million in January as Korea expanded purchases of semiconductor manufacturing equipment, natural gas and oil.

The ministry expected a favorable trade environment this year in line with the global economic recovery, but cautioned over rising protectionism in major trading partners, including China and the U.S., a strengthening Korean won and potential interest rate hikes in major economies. 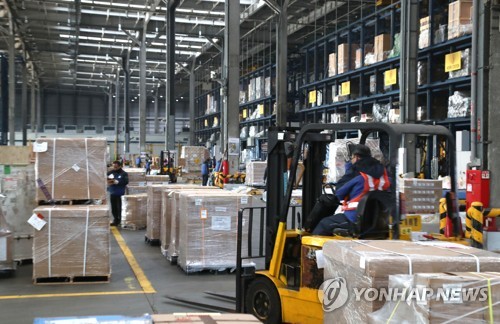