Kim made the remarks as he visited Zhongguancun, a technology hub in Beijing, ahead of talks with his Chinese counterpart, He Lifeng, chairman of China's National Development and Reform Commission, later in the day.

While checking out technology innovations at Zhongguancun, Kim also introduced South Korea's efforts to emulate Silicon Valley style and innovation by expanding its own technology hub in Pangyo, near Seoul.

The "2nd Techno Valley" in Pangyo is designed to nurture some 1,400 startups, offering workspace and consulting services for funding at cheap prices, according to the finance ministry. 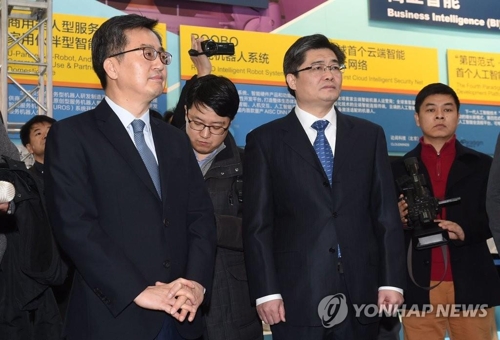 Finance Minister Kim Dong-yeon (L) visits Zhongguancun, a technology hub in Beijing, on Feb. 2, 2018, in this photo provided by the Ministry of Strategy and Finance.