(SEOUL=Yonhap News) Korea will invest 35 trillion won (US$32.4 billion) in developing electric, autonomous and other future vehicles by 2022 to secure a new growth engine in the rapidly changing automobile market, the transport ministry said Friday.

In a seminar with some 50 auto experts from businesses, research institutes and colleges, the Ministry of Trade, Industry and Energy and the Ministry of Land, Infrastructure and Transport outlined the government's plan to develop future vehicles and set up the "smart transportation system" to back up autonomous vehicles, respectively, the transport ministry said in a statement.

In its broad efforts to open an "era of electric vehicles," the government will partner with businesses, such as Hyundai Motor Group, to develop an all-electric car that can travel more than 500 kilometers on a single charge and increase the number of rapid charging stations to 10,000, similar to the number of the nation's gas stations of 12,000, by 2022, it said.

The government said it will continue to offer subsidies to those who purchase an electric vehicle due to their high prices by 2022.

In efforts to promote driverless car technologies, the government will build the K-City, a world-class test bed for autonomous technologies, this year. The 320,000-square-meter city is composed of a highway, downtown, outskirts, parking facilities and residential communities, the statement said.

Moreover, the government aims to transform the country's 5,000-kilometer-long highway into a smart highway by 2022 to share all transportation and infrastructure information with autonomous vehicles running on it and between autonomous vehicles, it said. 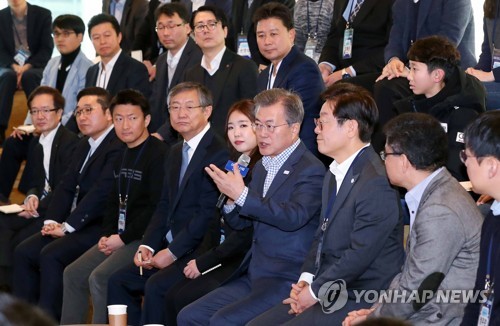 In this photo taken Feb. 2, 2017, President Moon Jae-in (4th from R) delivers a speech during a seminar on future vehicles held in Pangyo, just south of Seoul. (Yonhap)