(SEOUL=Yonhap News) Korea unveiled a long-term plan Monday to secure indigenous space technology with the aim of successfully landing a spaceship on the moon by 2030, the science ministry said.

Under the roadmap crafted and finalized by the Ministry of Science and ICT, the government will secure the necessary basic technology to send a spacecraft into lunar orbit by 2020 and to land it on the surface of Earth's satellite a decade later.

It marks the first time that the Moon Jae-in administration, which took office in May 2017, has mapped out a long-term strategy for space exploration. In the past, the country has mostly been busy with narrowing a technology gap with powerhouses such as the United States and Russia, the ministry said.

"This plan is focused on improving safety, deviating from previous plans that were focused on boosting the national image or economic development," Vice Minister Lee Jin-gyu told reporters.

In recent years, the global space program market has been spearheaded by private companies that are sending humans and spacecrafts into space.

In order to meet the target, the ministry will begin analyzing critical related technology in 2019, officials said.

In order to implement the space plan successfully, the government will also build its own space GPS called the "Korean Positioning System" and start providing the service from 2035.

A total of seven navigation satellites are planned to be launched and operated for the construction of the radio navigation system, officials said.

Currently, the Korean government is in the process of developing the 550-kilogram Korea Pathfinder Lunar Orbiter. The small spacecraft is mostly built with local parts with some technical support from NASA, particularly in areas of telecommunications and navigation, officials said. 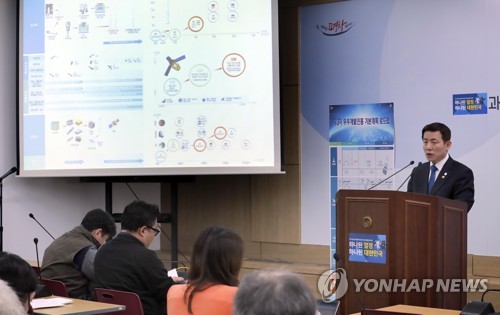