At the 2018 Singapore Airshow, which runs through Sunday, KAI showcased the KT-1 basic and the T-50 advanced trainers. It also highlighted FA-50 light attack aircraft and the Surion transport utility helicopter, KAI said in a statement.

KAI has exported 64 T-50 trainer jets worth US$2.9 billion to countries such as Indonesia, Thailand and the Philippines, it said.

KAI Chief Executive Kim Jo-won will stay in Singapore during the airshow to meet with military officials and executives from local airlines as well as with maintenance, repair and overhaul (MRO) companies to seek possible partnerships or contracts, the company said. 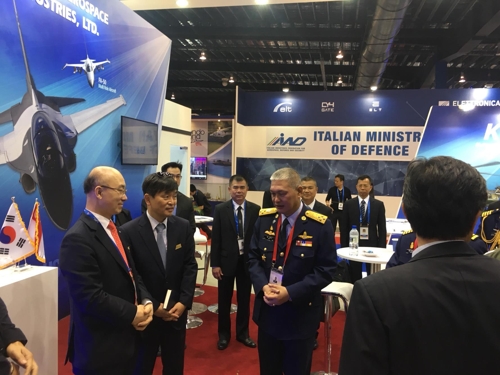 In this photo provided by KAI and taken on Feb. 6, 2018, the aerospace company's CEO Kim Jo-won (L) meets with military officials at the 2018 Singapore Airshow. (Yonhap)