(SEOUL=Yonhap News) The government said Wednesday it will open a center to promote Korea in Gangneung, one of the cities where the 2018 PyeongChang Winter Olympics will be held, with the international sports event now just two days away.

The Ministry of Culture, Sports and Tourism said the center called Korea House will be opened to the public Thursday at Gangneung Olympic Park, located some 230 kilometers east of Seoul.

The ministry said it will present information and items to promote the country's tourism on the first floor, while holding various cultural events -- including K-pop and traditional performances -- during the Olympics, which will kick off Friday for a 17-day run. All the events will be held free of charge on a first-come, first-served basis.

The second and third floors of the building will serve as a lounge for athletes to analyze their performances, have a drink and receive massage services, the ministry said.

The Korean government has been gearing up efforts to attract more tourists during the quadrennial event, which will be held in the country's alpine town of PyeongChang, 180 km east of the capital, and its adjacent cities.

On Tuesday, the Visit Korea Committee held a discussion session to vitalize sales of a transportation card exclusively tailored for foreign visitors.

Named the Korea Tour Card, the pass provides various discount options at local shops and tourist attractions. A total of 200,000 cards have been sold since it was first launched in January last year, the committee said.

This undated photo provided by the Korea Tourism Organization shows South Korea's promotion center, the Korea House, in Gangneung, 130 kilometers east of Seoul. Set to open Feb. 8, 2018, the center will hold various events to promote the country during the 2018 PyeongChang Winter Olympics. (Yonhap) 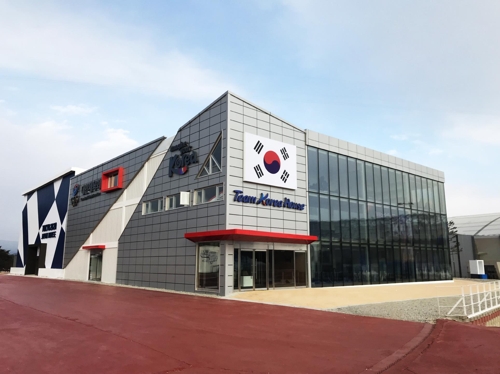