Samsung Elec to add a second next-generation fab in Pyeongtaek
Date
2018.02.07
Views
830
According to Pulse by Maeil Business News Korea,

Samsung Electronics Co. will erect another multibillion-dollar next-generation fabrication line at its semiconductor base in Pyeongtaek, Gyeonggi Province by 2020 next to the 64-layer V-NAND memory fabrication line, operational since July last year and budgeted for 30 trillion won ($27.7 billion) expansion by 2021.

The world’s top chipmaker’s management committee that decides mergers and acquisition and spending plans approved the project on Wednesday, the first investment decision after Jay Y. Lee, vice chairman, was released on Monday from prison after nearly a year-long imprisonment as his sentence had been cut and suspended by an appeals court determining a bribery case connected to ousted President Park Geun-hye.

The meeting gave a go-ahead for the framework construction. Exact spending plan would be known after the design of the fab - whether it is for next-generation NAND flash or DRAM manufacturing, or both - is decided from study on market demands and movements, sources said.

Given the space, the new fab is expected to be multi-purpose and in the similar investment scale of 30 trillion won as with the first one which was originally designed for DRAM but later reconfigured for NAND. The lines were expanded to accommodate DRAM lines last year.

Any capacity increase and adjustments by the dominant player in both DRAM and NAND makes direct impact on not only the semiconductor market and industry but also the equipment sector.

“The Pyeongtaek complex was originally budgeted for 100 trillion won to host four fabs. Samsung is moving fast as not to miss the cyclical peak for preemptive investment,” one anonymous industry source said.

Samsung C&T Corp., Samsung Group’s construction unit, has embarked on the construction project named P2 Project by arranging the factory site, and plans to start work for exterior within this month upon gaining approval from the Pyeongtaek City government.

Samsung Electronics indicated last month that its capex for this year would decline from last year’s record spending of 43.4 trillion won. But its spending for semiconductor will likely be close to last year’s 27.3 trillion won. 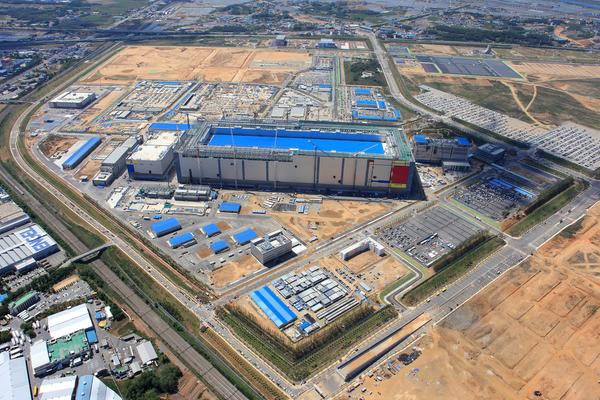 By Lee Dong-in and Choi Mira