The project will be driven by the "Gap 5" strategy, under which Korea will try to maintain a five-year lead compared to emerging economies in the two sectors while at the same time closing the gap with advanced nations.

The underlying consensus is that while Korean companies are the leaders in the global semiconductor and display businesses, the key supporting industries, such as facilities and materials, are dominated by the United States, Japan and Europe, limiting production localization. The firms also need to move on from memory chips and organic light-emitting diodes (OLEDs) to newer markets, the ministry said.

For the semiconductor industry, a "K2 Project" research will begin to develop a chip with a speed 1,000 times faster but with only one-thousandth the power demand. The research will also include the development of new materials and processing technology exceeding nano-level.

In the display sector, the ministry will focus on developing flexible panels with more than 20 percent pliability and on production through printing that will cut material use by 60 percent and halve processing time.

The ministry said it intends to complete the planning and budgeting procedures this year to immediately launch the project.

The project will be bolstered by efforts to create new markets for chips and display. The goal is to attain 6 percent of the world market for system chips by 2022, up from the current 3-4 percent. Exports of OLEDs are to triple to US$25.5 billion by 2022 from last year's $8.5 billion.

The "Coexistence 2.0" program would provide 2 trillion won (US$1.84 billion) to small companies that are competitive in manufacturing facilities and materials.

Other details of the project feature 1-trillion-won loans from large conglomerates to smaller companies, education for 2,000 graduate and doctoral students with assistance from the government and the business community, and an additional 200 billion won for a fund to promote the growth of the semiconductor industry.

In the case of the display sector, the localization goal is for 80 percent for facilities by 2022, up from 70 percent. For materials, the goal is to reach 50 percent, up from 30 percent. The government aims to have four of the world's top companies in the country once the targets are reached.

Conglomerates are to pitch in by investing 80.4 trillion won by 2024 and by creating jobs. 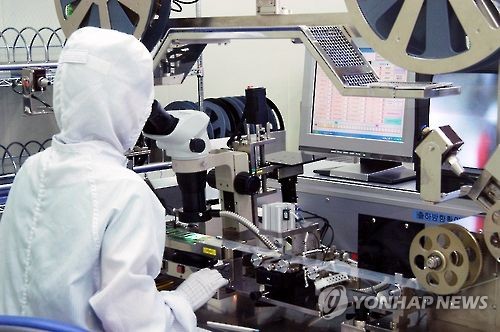