However, a weaker job market and ongoing trade issues are likely to weigh on the nation's economy, the finance ministry said in its monthly economy assessment report.

"Amid a modest growth in exports, our economy is maintaining its recovery pace as industrial output and investment increased for second consecutive month," the ministry said.

The report, called the "Green Book," is based on the latest economic indicators of such key factors as output, exports, consumption and corporate investment, which provide clues as to how the economy has been faring in recent months.

The country's overall industrial output gained for second consecutive month, and investment also advanced on rising demand for chipmaking equipment, according to the latest review.

Korea's exports have been on a steep upside cycle since November 2016, led by a spike in global demand.

Outbound shipments soared 22.2 percent in January from a year earlier on brisk sales of memory chips and petrochemical products, according to government data.

Outbound shipments came to US$49.21 billion for January, up from $40.25 billion a year earlier, according to the data compiled by the Ministry of Trade, Industry and Energy.

Exports rose for the 15th month in a row, posting double-digit growth for the first time in four months. 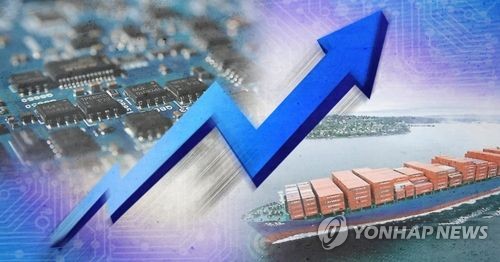