A total of 196,835 units worth US$3.24 billion were shipped abroad in the first month of this year, up from 178,371 units in January the previous year, according to the data compiled by the Ministry of Trade, Industry and Energy.

"Exports to most markets except North America and Asia increased on the back of the continuing popularity of compact SUVs and eco-friendly cars," the ministry said in a release.

Auto sales in the United States, the world's biggest market, tumbled 50.1 percent due to tough competition from global brands, while exports to the European Union and Middle East rose 27 percent and 52 percent, respectively. South Korean carmakers did poorly in the U.S. mainly due to their weak crossover SUV lineup.

Exports of auto parts declined 6.5 percent to $1.83 billion over the period on sluggish sales in North America and Asia.

A total of 322,408 cars were produced in January, up 8.2 percent from a year earlier, despite there being fewer working days due to strikes at some factories operated by Hyundai Motor Co. and Kia Motors Corp., the ministry said. 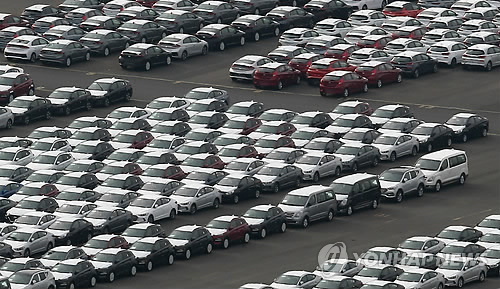 Cars are lined up for shipping at Hyundai Motor Co.'s factory in Ulsan, 410 kilometers southeast of Seoul, on Jan. 7, 2018. (Yonhap)