Korea struggling against increasing protectionist barriers from the United States and China has made headway on the trade front by inking free trade agreements with five Central American countries.

According to Korean Ministry of Trade, Industry and Energy on Wednesday, Korea has officially signed separate bilateral agreements with Costa Rica, El Salvador, Honduras, Nicaragua and Panama after talks of nearly three years.

With the addition, Seoul has become a FTA powerhouse with deals across major continents. Korea currently has 15 free trade deals with 54 countries and regions including the United States, European Union, and China. It has tariff-free pact with countries all across South and North America.

The latest deal eliminates duties on 95 percent of traded goods and services in the five countries. The agreements are subject to parliamentary approval in each country.

“The deal in Latin America secures a third route for exports to America amid mounting protectionism from Washington,” the ministry said in a statement.

The ministry estimated $580 million benefit in trade balance over the next 15 years and output increase by 2.57 trillion won ($2.4 billion), mostly helping the automobile and steel exports.

Agricultural staples like rice, chili pepper, garlic and onion were excluded from the item list for tariff elimination to minimize damages to related local industries, according to the Korean ministry. Tariffs on beef and pork will be lifted after a grace period of 10 to 19 years. 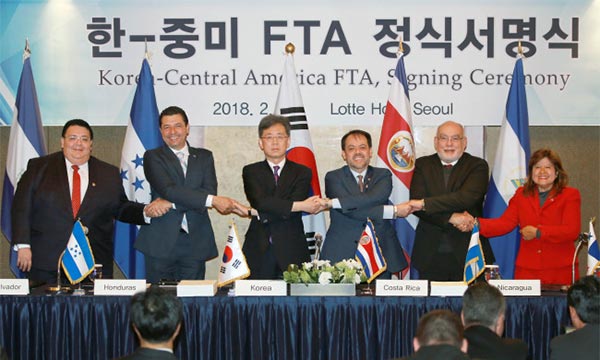 [Photo provided by The Ministry of Trade, Industry and Energy]

By Ko Jae-man and Lee Ha-yeon