Hyundai Merchant Marine said it opened "a new Asia-Northern Europe loop in accordance with the increased demand for express service."

The Asia-Europe Express (AEX) is an independent service operated by Hyundai Merchant Marine outside of its strategic cooperation with 2M, the world's largest shipping alliance.

The Korean shipping firm has, until now, used 2M vessels in European trade.

Hyundai Merchant Marine said it will deploy a total of 10 Panamax vessels with a capacity of 4,600 twenty-foot equivalent units (TEU) for the AEX service, with the first voyage scheduled for April 8 from Korea's southeastern port of Busan. TEU is a measurement of a ship's cargo capacity.

Hyundai Merchant Marine's handling volume, mainly in trade going through Asia, the U.S. and Europe, increased dramatically to 4.03 million TEU in 2017, up more than 30 percent from a year earlier. 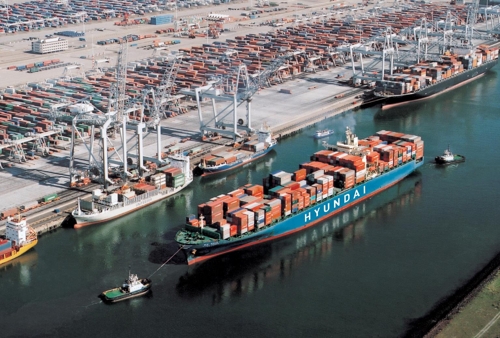