Outbound shipments reached US$44.88 billion in the one-month period, up from $43.16 billion a year ago, according to the data compiled by the Ministry of Trade, Industry and Energy.

Exports rose for the 16th consecutive month, but numbers were affected by the four-day holiday in Korea as well as people taking days off to celebrate the Lunar New Year in China. China is Korea's largest export destination.

Korea's trade surplus came to $3.31 billion, marking 73 straight months in which the country's exports have exceeded imports, the ministry said.

"Despite fewer working days and high base effect, South Korea's exports increased in February to maintain the upward trend," the ministry said in a release. "Strong demand for memory chips and increased sales prices of petroleum products were among the main contributors to the export growth."

In contrast, sales of automobiles dropped 14.4 percent on sluggish performance in the United States, and steel fell 9.7 percent due to weak demand in China.

Shipments to the United States backtracked 10.7 percent due to downbeat sales of autos and wireless communication equipment. Korea's trade surplus with the U.S. tumbled 76.9 percent on-year to $360 million in February, the ministry noted. 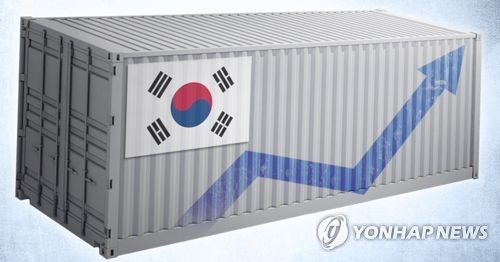