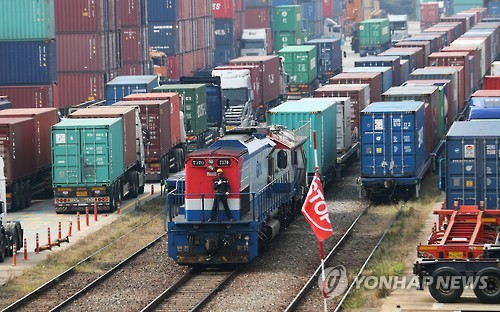 (SEOUL=Yonhap News) The government is seeking to invest more in the nation's rail transport sector over the next three years to help it take up a greater share of the nation's freight transport, the transportation ministry said Tuesday.

The government also plans to introduce flexible freight rates to boost the sector's competitive edge and consider building a railroad logistics hub in the Seoul metropolitan area to brace for a possible reunification of the divided peninsula.

Finalized and unveiled by the Ministry of Land, Infrastructure and Transportation, the rail transport development plan calls for raising the portion of the railroad network to the nation's freight transport to 10 percent in 2021 from the current 5 percent.

As of 2015, the volume of freight carried by the railroad network came to 37 million tons, or 5.3 percent of the country's cargo transport. The proportion has been on a steady decline since rising as high as 8.1 percent in 2008.

Weakening price competitiveness is cited as the prime culprit for the decline.

According to the plan, the government will adopt a system of flexible freight rates in a bid to boost its competitive edge and offer a range of discounts to attract more cargo.

In order to gear up for the unification of the divided Koreas, the government will mull constructing a railroad logistics hub on the western outskirts of Seoul and expand a railroad line on the east coast and south of the inter-Korean border.

The government will also take a variety of measures to further develop the railroad logistics sector, including attracting more private investment.