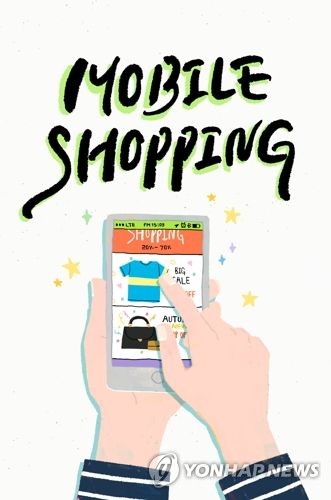 (SEJONG=Yonhap News) Purchases made through the Internet and mobile devices in South Korea continued to show solid growth in January as use of smartphones has fully caught on with shoppers due to fast delivery and convenient payment options, government data showed Wednesday.

Transactions made with computers, smartphones and tablets reached 8.69 trillion won (US$8.16 billion) in January, up 21 percent from a year earlier, according to the data from Statistics Korea.

The total amount of mobile transactions soared 32.4 percent to 5.25 trillion won thanks to rising sales of pet supplies, furniture and foods.

Mobile transactions accounted for 60.3 percent of all online purchases in January.

Mobile purchases in South Korea have been on a steep rise for years as smart devices expand their presence in the world's most wired country and rapidly replace computers as the means of conducting online transactions.