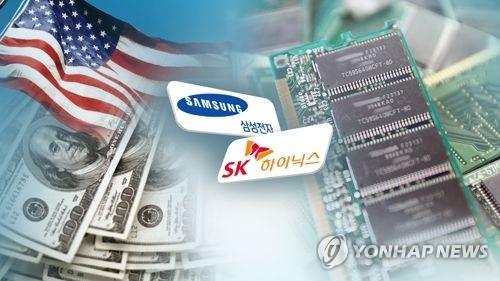 The figure is slightly below 4.46 trillion won, the record operating profit posted in the fourth quarter last year, but up 75.8 percent from 2.46 trillion won for the first quarter of last year.

Park Yoo-ak of Kiwoom Securities estimated the operating profits of SK hynix at 4.5 trillion won for the January-March period this year, saying, "The strength of DRAM prices are continuing and the market for NAND flash memory chips is also good."

The semiconductor division of Samsung Electronics Co. will likely post a record operating profit for the first quarter this year at 11.2 trillion, up from 10.9 trillion won for the October-December period last year, Kwon Seong-ryul of DB Financial Investment said.

"The semiconductor sector is robust as the demand for DRAM chips for server products are high and the demand for PCs and mobile products is also strong due to seasonal factors," he said.

Kim Woon-ho of IBK Investment & Securities Co. put the operating profit of the semiconductor division of Samsung Electronics at 10.88 trillion won for the first quarter, saying "Operating profit will likely rise in the DRAM chips and fall in the NAND flash memory chips."

Yoo Jong-woo of Korea Investment & Securities, however, was a bit pessimistic due to the rise in the inventory of memory chips in January. He forecast sluggish sales in the second quarter of this year.