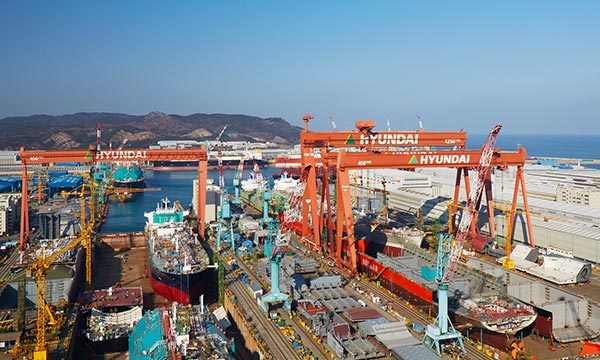 South Korea’s largest shipbuilder Hyundai Heavy Industries Co. has successfully raised 1.2 trillion won ($1.13 billion) with its new share issue, a move that will help it improve its financial soundness and bolster investment in research and development.

Hyundai Heavy Industries announced in a regulatory filing on Monday that it received subscriptions for new shares from existing shareholders and employee stock ownership association last week, and the subscription rate was 107.8 percent. The new shares were priced at 98,800 won apiece upon subscription on March 8 and 9.

The new shares will be listed on the country’s main bourse on March 27.

The new share issue has allowed Hyundai Heavy Industries to raise 1.235 trillion won, which it plans to use to boost business competitiveness ahead of expected industry recovery. Of the total proceeds, the shipbuilder plans to use about 820 billion won in repaying debts, and the remaining 420 billion won in promoting research and development of environmentally-friendly and smart vessel technologies. The latest capital increase will allow Hyundai Heavy Industries to reduce its debt ratio from 89.9 percent in December last year, to 78 percent.

The company said that its three shipbuilders - Hyundai Heavy Industries, Hyundai Mipo Dockyard Co., and Hyundai Samho Heavy Industries Co. - will aim to win $13.2 billion worth of orders this year, up 30 percent from last year’s performance, based on financial stability achieved from the new rights issue.

By Woo Je-yoon and Lee Eun-joo