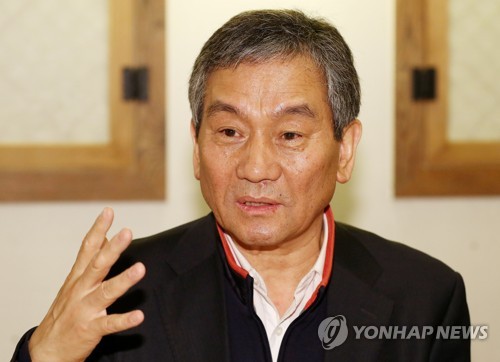 (SEOUL=Yonhap News) South Korea will push forward with an ambitious plan to develop a reusable space launch vehicle as the country strives to become a global powerhouse in the aerospace industry, the chief of the country's aerospace institute said Wednesday.

Up until now, practically all orbital rockets were disposable, meaning the rockets were thrown away after being launched into space.

"Rockets are reused in cases like SpaceX," Lim Cheol-ho, director of the Korea Aerospace Research Institute (KARI), told reporters in Seoul. "KARI is currently in the process of mapping out a basic plan for a similar rocket."

Lim said the mission would serve as a critical milestone for South Korea's aerospace history and boost its efforts to catch up with other global powerhouses, such as the United States, Japan and Russia.

"Review of the plan is expected to be completed within one year," he said.

The institute is also working out a detailed roadmap to secure space technology with the aim of successfully landing a spaceship on the moon by 2030.

The KARI will secure the necessary basic technology to send a spacecraft into lunar orbit by 2020 and to land it on the surface of the moon a decade later, Lim said.

The country is also in the process of developing a pair of second generation Chollian satellites, one of which will be its first geostationary satellite and the other will be used for observing the ocean, Lim said.

The KARI is also working in the second stage of testing an indigenous projectile; the testing is slated for completion in October. The institute did not disclose details of the project.