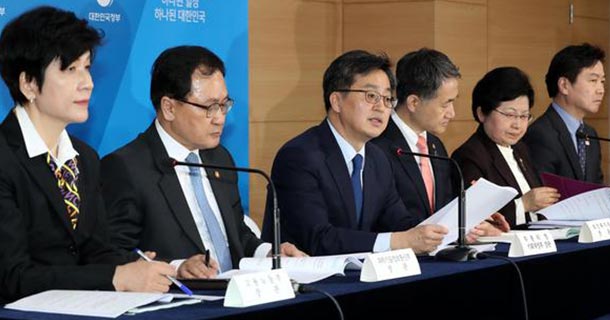 President Moon Jae-in upon being elected in May last year ordered 11 trillion won extra budget and budgeted largest-ever fiscal spending of 429 trillion won for 2018. When passed, this year’s spending would stretch to 433 trillion won, up 5.3 percent from last year’s 410.1 trillion won.

“How we spend the money is as important as the scale of a supplementary budget. We will ensure the spending draws effective outcome,” said Kim Dong-yeon, deputy prime minister and finance minster in a press briefing on Thursday.

Seoul rarely sought an extra budget in the first half as it mostly creates one in the latter half upon unexpected natural or external disasters.

He explained this year’s spending plan would focus specifically on creating jobs in the private sector and supporting startups and young entrepreneurs in contrast to last year’s 11 trillion won supplementary spending to boost hiring through increased jobs in the public sector.

Despite last year’s increased spending for job creation, the unemployment rate for youth or people aged between 15 and 29 rose to its worst-ever level of 9.9 percent. The jobless problem is expected to worsen this year and onwards due to massive layoffs from streamlining in shipyards and shuttering of GM Korea Gunsan factory. Moreover, nearly 400,000 born between 1991 and 1996 to parents of Korean baby boomers will be joining the job market over next three to four years.

Kim during a cabinet meeting last Friday warned that “the youth jobless problem will become a crisis if we do not take action now.”

The government plans to seek for a parliamentary approval on the extra budget bill early next month. Kim said this year’s supplementary budget would be financed through 2.6 trillion won surplus in tax revenue and the rest from other state reserves.

The plan, however, will likely be resisted by the opposition suspecting its motive as to win votes in the upcoming June local elections.

Under its new youth job creation scheme, the government plans to give up to 9 million won in subsidies until 2021 for every youth hired to a workplace with five or more employees on top of annual tax break ranging from 3 million to 11 million, depending on the business size.

Also, it plans to give 500,000 won monthly allowances to young job seekers for six months next year. A young entrepreneur starting a business will be exempted from all taxes for five years. Volunteer workers in underdeveloped countries will get state sponsorship of 20 million won a year.

Each young person could benefit 10,400,000 won a year through cash aid, tax breaks, and easier and cheaper loans.

By Cho Si-young and Cho Jeehyun