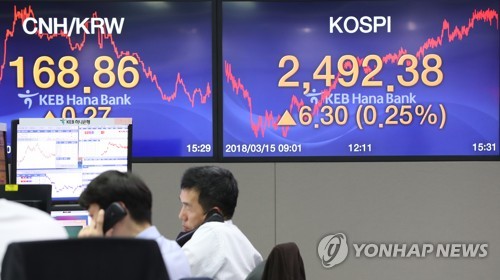 (SEOUL=Yonhap News) South Korea's main bourse has made a solid rebound from a decline earlier this year to be the seventh-best performing stock market among major economies, data showed Monday.

The benchmark Korea Composite Stock Price Index (KOSPI) closed at 2,492.38 on Thursday, rising 1 percent from the end of last year, according to the data by the Korea Exchange (KRX).

This growth placed the South Korean market among the better performing of the major stock indices out of the Group of 20 nations. Compared to 2016, the KOSPI jumped a whopping 23 percent, the bourse operator noted.

So far this year, Brazil's stock index registered the highest growth rate of 11.2 percent, followed by 8.8 percent logged by Argentina, 8 percent by Russia, 7.2 percent by Saudi Arabia, 3.9 percent by Italy and 1.6 percent by Turkey.

The Dow Jones industrial average of the United States edged up 0.6 percent to stand at eighth during the cited period.

In contrast, major European nations suffered a decline, with Britain skidding 7.1 percent, Germany 4.4 percent and the European Union 2.6 percent, according to the KRX. Japan also saw its benchmark stock index tumble 4.2 percent, and China has fallen 0.5 percent so far this year.

With the global market still reeling from concerns over U.S. market policy, the KOSPI recovered 95.9 percent of its record high level of 2598.18 registered on Jan. 19, 2018, becoming the third-best performer among the G20 countries.

In term of recovery, Turkey topped the list by rebounding 97 percent, followed by Brazil with 96.9 percent, according to the data.