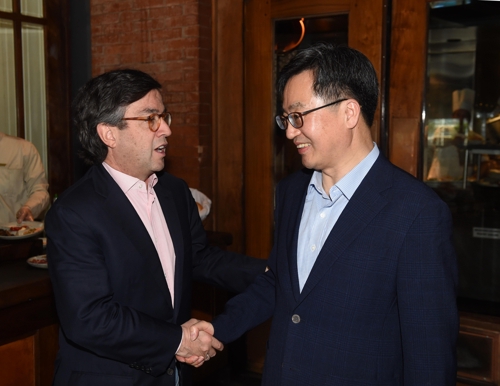 In a meeting with Luis Alberto Moreno, president of the Inter-American Development Bank (IDB), in Buenos Aires, Argentina, on Sunday, Seoul's Finance Minister Kim Dong-yeon contended that the consultative body is necessary to bolster ties between South Korea and the Latin American region.

The two sides also agreed to expand a program for human resources exchange under which young South Koreans would get a chance to work at local firms, according to the ministry.

Last year, South Korea said it will expand joint financing with the IDB in a bid to play a larger role in infrastructure-building projects on the populous continent.

The two sides signed a memorandum of understanding (MOU) to raise US$300 million for joint financing with the IDB, upgrading the existing $100 million fund.

Created in 2015, the Korea-IDB joint fund is aimed at providing loans to infrastructure development projects in Latin America.

The IDB was founded in 1959 to promote regional cooperation and integration in Latin America, with South Korea joining the organization in 2005.