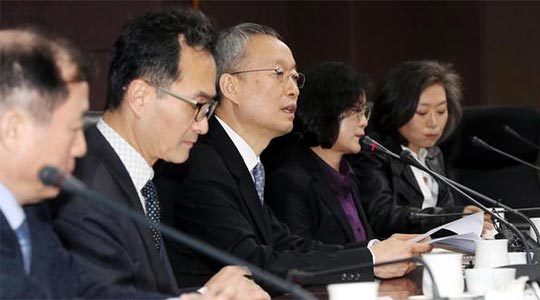 South Korea’s steel shares gained a boost on Monday amid hopes that Seoul may have persuaded Washington to excuse Korea in its new sweeping tariffs on steel imports before they take effect on Friday.

The steel category was uplifted by reports speculating Korea may have bargained to be excluded from the 25-percent tariff target in return for concessions in the upgraded bilateral free trade pact.

“I am hoping to hear good news later this week,” Paik told reporters.

Earlier this month, U.S. President Donald Trump rubber-stamped proposed steel barriers based on a hardly-used trade act provision to protect national security interests. Australia was dropped from the original list on the grounds that it is a security ally. Seoul has been arguing for the same relief as it is one of its strongest allies since the Korean War.

“The U.S. views Korea as an important ally, but there is lingering concern about steel supply glut,” he said.

According to multiple industry sources, the U.S. is using the tariffs on steel as leverage to pressure Korea in the talks to revise the bilateral free trade agreement (FTA), raising the possibility that Korea may secure exemption from the tariff on imported steel before the effective date. They also note the possibility of reaching a “package deal” that includes revision in the FTA and steel tariff exemption following progress in specific discussion.

On such possibility, Paik said that negotiations are under way “simultaneously and in order,” and they are being held with many open possibilities. A package agreement is a “methodological” option of negotiations, he said.

By Ko Jae-man and Lee Eun-joo