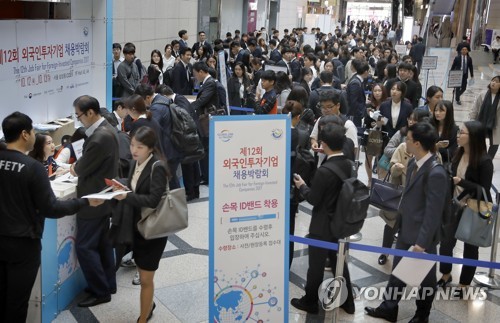 (SEOUL=Yonhap News) The government said Thursday it will invest heavily in the renovation of old industrial complexes across the country in the coming years so they can serve as incubator venues for startups set up by young people.

The Ministry of Trade, Industry and Energy said it will put 132.8 billion won (US$124 million) into six industrial complexes this year to make them youth-friendly. The complexes will be created to help information technology (IT) and knowledge-based industry startups.

The ministry also plans to expand the number of the knowledge-based industrial centers to 1,100 by 2022 from the current 685 across the country with financial support, as well as deregulations by the government. These centers could attract over 2.4 trillion won of investment from the private sector.

The ministry expects the renovated industrial complexes to create about 22,000 new jobs for the young generation by 2022.

As of the end of December, the unemployment rate for people between 15 and 29 years of age came to 9.2 percent, nearly three times higher than the national jobless rate of 3.3 percent.

The government earlier this month unveiled financial and tax incentives and the use of an extra budget to tackle unemployment of young people with the aim of stabilizing the youth jobless rate in the 8 percent range by 2021.

The measures center on extending direct financial and tax incentives to young jobseekers. Seoul has also proposed broader support for startups launched by young people with part of the financing to come from a supplementary budget of 4 trillion won.