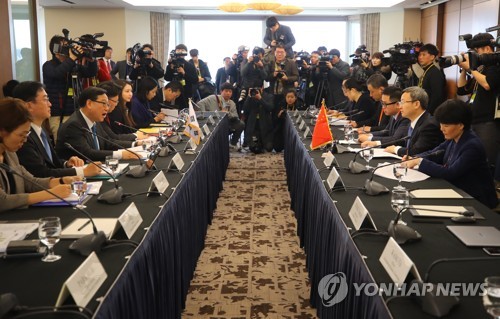 (SEOUL=Yonhap News) South Korea and China on Thursday began the first round of talks to expand the scope of the bilateral free trade agreement (FTA) to better cover the service and investment sectors and increase business opportunities for both sides.

The two nations implemented the FTA, which is focused on lowering tariffs on goods, in December 2015 and recently agreed to hold negotiations to upgrade the trade deal.

Kim Young-sam, a deputy minister of trade and investment at the Ministry of Trade, Industry and Energy, and Wang Shouwen, vice Chinese commerce minister, attended the first dialogue held in Seoul.

"The time has come for South Korea and China to put tough times behind them and raise their economic and trade relations to a new level," Kim said in an opening address. "The (follow-up FTA) negotiations will help further expand the fast-growing services trade and create a stable investment environment in the two nations."

China has been reducing its focus on manufacturing to restructure itself as a more service-oriented economy. China's service industry was rated at US$5.6 trillion in 2016, making it the world's second-biggest market.

The two sides will exchange their views on the service sector and on legal issues in the first talks before moving on to market access and investor protection measures in following dialogues, the ministry said.

"The government will seek to expand market access in tourism, culture and finance through the negotiations to improve the competitiveness of the Korean service industry and create new jobs in the sector," the ministry said in a release.

China defended free trade and open markets, calling for South Korea to collaborate its efforts to stand up against the rising protectionism, a thinly-veiled comment aimed at U.S. President Trump's "America First" policy.

"At the moment, the global recovery of trade growth is very fragile and the trend of trade protectionism is on the rise," Wang said in a speech. "As such as a background, it is very important for China and Korea, two important economies in East Asia, to send a positive signal for our further market opening."

The Chinese official called for engaging talks in "programmatic manner" to have a "balanced relationship" in investment and services in addition to the trading of goods.

"We should fully tap the potential in our bilateral services and investment by producing a credible investment and services package in the second stage of the negotiations," Wang said.

Since South Korean companies have grappled with non-trade barriers like investment restrictions and regulations, industry experts expressed hope that follow-up negotiations will pave the way for greater access to a market of 1.4 billion Chinese consumers.

Local companies stressed the importance of the Chinese government's transparency and consistency in implementing regulations on foreign companies and investors to create a stable business environment regardless of diplomatic relations between the two nations.

Last year, South Korean retailers and tourism agencies suffered from weak sales and unfavorable sentiment in China over Seoul's deployment of an American missile system, which has soured two-way relations and triggered a boycott of South Korean-made goods.

Provincial Chinese governments also banned the sale of group tours to Seoul in apparent retaliation against the installation of the Terminal High Altitude Area Defense battery.