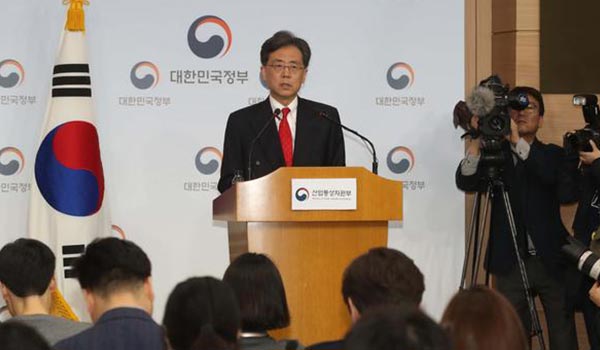 South Korea agreed to widen its automobile market to U.S. producers while defending the agricultural front in the partial revisit to the 2012 bilateral free trade agreement in return for winning permanent exemption from Washington’s sweeping new tariffs on steel imports.

Seoul’s trade representative Kim Hyun-jong, upon returning from a month-long marathon negotiation in Washington, said Monday that the two countries have reached an agreement on amending the six-year-old trade pact and will sign a revision to the deal soon.

The revised agreement comes less than three months since the talks began upon Trump’s order to fix what he called a “horrible” and “job-killing” deal. To become valid, the new deal must be approved by legislatives of the two countries.

As expected, Seoul made concessions in the automobile sector that accounts for 73 percent of the country’s trade surplus with the U.S.

Korea agreed to receive up to 50,000 U.S.-made cars that meet American safety regulations even if they do not comply fully with domestic guidelines, doubled from the current 25,000 units. It also agreed to push back the U.S. tariff phase-out schedule for Korean pickup trucks by 20 years to 2041.

But Kim said the country fended off requests for mandatory use of U.S.-made auto parts, a demand pushed by Washington during the North American Free Trade Agreement renegotiations with Canada and Mexico.

In exchange for opening up the auto market, Korea secured a permanent exemption from Washington’s tariffs of 25 percent on steel and 10 percent on aluminum imports, which went into effect last Friday. But the third-largest steel exporter to the U.S. agreed to cap its exports to 74 percent of last year’s export volume.

“We have removed the uncertainties over steel and defended the red line on agriculture,” Kim said.

The news boosted steel stocks and hurt the automobile category, which is already struggling at home amid growing popularity of imports.

Washington has slapped safeguard measures on Korean washer machines and solar panels and flagged steep tariffs to gain the upper hand in the trade talks.

By Lee Jin-myung and Kim Hyo-jin