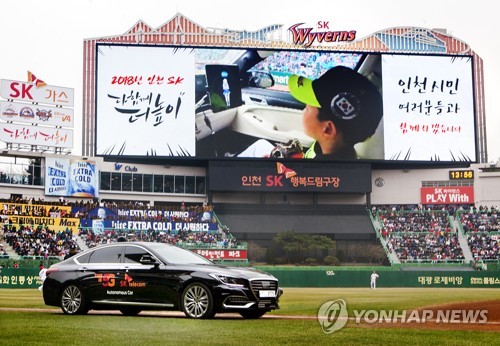 LG Uplus Corp. said it has reinforced the "U+ Pro Baseball" app to allow users to watch replays of scoring moments during real-time broadcasts.

The number of the app's users exceeded one million last year, and the figure nearly doubled this year, a representative at LG Uplus said, noting that a growing number of people are opting for the company's unlimited data usage plan to view professional baseball games.

It takes about 3.6 gigabytes to watch a baseball game on smartphones.

The system checks the fine dust level at the stadium before instructing drones and sprinklers to release water ahead of the start of games and operating air conditioners while the game is underway.

The KT Wiz also run an app named "wizzap" to allow users to buy tickets, order food at the stadium, watch games, buy uniforms and get information about baseball players, including photos, video clips and SNS.

Featuring real-time broadcast of baseball games helped by AR technology, the app can be used only at the home stadium of the SK Wyverns in the Korea Baseball Organization (KBO) in Incheon, west of Seoul.

During the opening game of the season for the SK Wyverns on Saturday, a self-driving vehicle appeared on the field to carry the pitcher the first ball as an avatar was sending a message of support for the team in the car with the support of an artificial intelligence hologram.