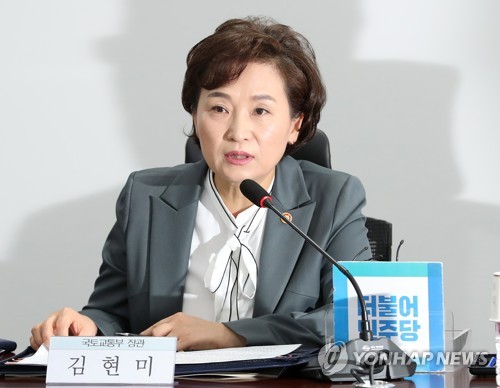 The two sides held a policy coordination meeting to plan out a road map to implement the five-year "New Deal" project to refurbish underdeveloped communities by building infrastructure and welfare facilities, providing rental homes and remodeling dilapidated shops and factories.

The project worth 50 trillion won (US$46.5 billion) is one of President Moon Jae-in's key election pledges.

"(The government) plans to provide funds and rental space at affordable rates to ensure that old public facilities, empty shops and abandoned factories will be used to create startups and cultural space for youths," Kim Hyun-mee, the minister of land, infrastructure and transport, said during a policy coordination meeting with the ruling party.

"The New Deal will proceed with the communities and their residents leading it and the government supporting it," she added.

As part of the renewal project, the government and party agreed to establish 250 regional "innovation" centers by 2022 so as to support venture startups for youths and guide "innovation-based" growth.

They also decided to create cultural facilities by using public land or abandoned schools as well as to build some 20 facilities each year to help young adults find offices for startups and rental homes.

In addition, they plan to designate some 250 startups related to the urban renewal as "prospective social enterprises" entitled to state support by 2022.

The ruling party, on its part, will craft measures to address possible problems that may arise from the renewal process, such as the alienation of locals in urban development and real estate speculation.

"The new government's New Deal policy is in response to the decline of old communities and should be led by the local communities themselves with an aim to enhance the living standards for locals," Woo Won-shik, the party's floor leader, said.

Kim Tae-nyeon, the party's policy chief, said his party will also seek legal measures to prevent ordinary citizens and small merchants from facing gentrification due to any negative impact from the urban renewal program.