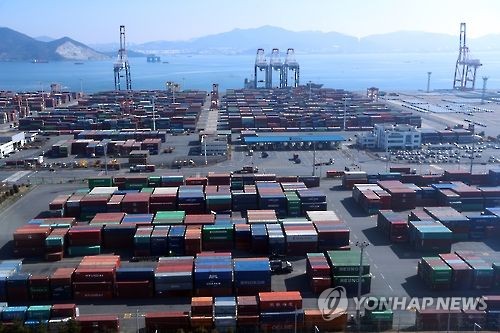 (SEOUL=Yonhap News) A majority of South Korean exporting firms expect overseas shipments to continue their uptrend in the second quarter despite a litany of negatives, a poll showed Thursday.

The Korea International Trade Association (KITA) said its export business survey index (EBSI) of 993 exporters stood at 102.8 for the April-June period, up from 100.8 for the current quarter.

It marks the fifth consecutive quarter that the EBSI has topped the benchmark 100 level. A reading above 100 means optimists outnumber pessimists, while a reading below the benchmark means the opposite.

According to the findings, manufacturers of agro-fisheries goods, machinery and oil products predict their business conditions will improve sharply in the coming quarter.

The EBSI reached 130.9 for producers of agricultural and fisheries goods, 122.4 for machinery makers and 121.9 for oil product manufacturers.

Makers of oil and petrochemical products are expected to bask in rising crude prices and growing demand from China, with exporters of agricultural and fisheries products likely to benefit from increasing shipments to the world's second-largest economy.

Increased infrastructure investment in the United States and China is projected to come as a boon to South Korean machinery manufacturers in the next quarter.

Exports of steel and nonferrous metal products, however, are predicted to remain sluggish in the second quarter due to import regulations by the U.S. and other major economies. In addition, makers of wireless communication equipment are pessimistic about their business conditions due to fiercer global competition.

Meanwhile, the exporters predicted that they will face such negative factors as growing import regulations, worsening profitability, rising raw material prices and increased volatility of foreign exchange rates, according to the survey.

"The uptrend in South Korea's exports is expected to last into the second quarter, but local exporters will also face downside risks," KITA researcher Lee Jin-hyong said. "Exporting companies need to step up cooperation with the government and other agencies to overcome negative factors."