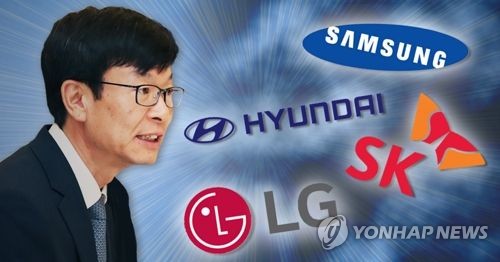 Kim Sang-jo, chairman of the Fair Trade Commission (FTC), made the remarks in response to an online petition filed with the presidential office Cheong Wa Dae. Over 200,000 citizens have signed it to call for the country's economic democratization.

The FTC chief has stressed that creating a level playing field for small and medium-sized companies is very important in a country where family-controlled conglomerates, known as chaebol, have dominated the economy for decades.

"Chaebol are the target of reform, and at the same time they are our economy's cherished asset," Kim said. "To reform chaebol is to help them reemerge as our cherished asset, instead of destroying them," he said.

One of the key policy objectives for the Moon Jae-in government is ensuring and accelerating economic democratization, a process that calls for stepped up efforts to create new, quality jobs -- another key election pledge of Moon -- as well as greater support for the socially and economically marginalized population.

Kim said reforming chaebol is the starting point for economic democratization, but without improving fair business practice, it cannot be achieved.