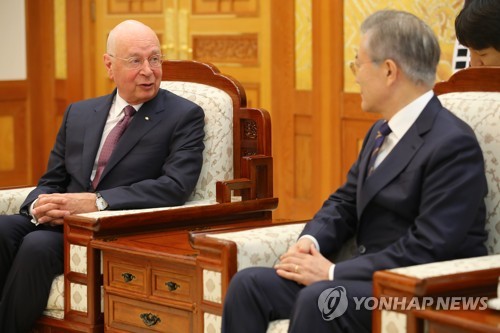 (SEOUL=Yonhap News) The upcoming summit between South Korean President Moon Jae-in and North Korean leader Kim Jong-un may determine the future course of not only the Korean Peninsula but the entire world, the chief of the World Economic Forum (WEF) said Wednesday, vowing his support for the inter-Korean summit slated to be held later in the month.

"I wish to take this opportunity to congratulate you on the recent South-North Korea dialogue and express my full support for the whole process," WEF chairman Klaus Schwab said while meeting the South Korean leader at his office Cheong Wa Dae in Seoul.

"This process is a very important process to the entire world. The World Economic Forum will do all it can to economically support this process," he said through his interpreter.

The head of the WEF, also known as the Davos Forum, noted stabilizing North Korea will serve the interest of all economies throughout the world.

He said the Korea issue will be at the center of next year's Davos Forum, extending his formal invitation for the South Korean president to visit the annual forum, expected to be held early next year in the Switzerland.

Moon offered his gratitude for the invitation, along with an apology for his failure to attend this year's forum due to the PyeongChang Winter Olympic Games held here.

He expressed hope for increased cooperation between his country and the Switzerland-based forum on the fourth industrial revolution, according to Cheong Wa Dae pool reports.

The South Korean president is set to hold a bilateral summit with the North Korean leader on April 27. His attendance at the Davos Forum, if made, will mark the first of its kind since he took office in May 2017.