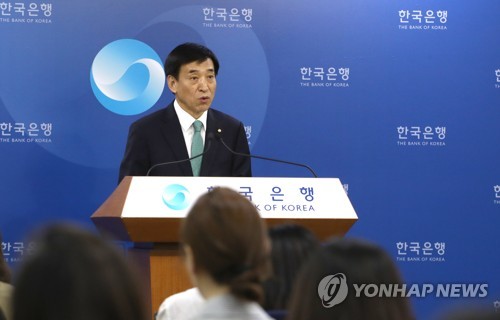 (SEOUL=Yonhap News) The central bank said Thursday that the South Korean economy is expected to grow 3 percent this year despite rising uncertainties at home and abroad.

The Bank of Korea (BOK) maintained its earlier growth forecast made in January, when it adjusted up the growth rate 0.1 percentage point from 2.9 percent, while it also keep its 2019 prediction unchanged at 2.9 percent.

But it revised down its inflation outlook to 1.6 percent due to a slowdown in oil prices, with consumer prices expected to rise 2 percent next year.

"Since we announced our prediction in January, we've checked internal and external economic conditions," BOK Gov. Lee Ju-yeol said at a press conference. "As a result, the growth rate will be 3 percent for this year, the same as the January forecast, and consumer prices will be lowered to 1.6 percent."

The BOK's growth estimate for 2018 is on par with those of the South Korean government and other international organizations, including the International Monetary Fund.

The central bank anticipated private consumption will expand 2.7 percent and facility investment will gain 2.9 percent to support growth this year, while construction investment is likely to backtrack 0.2 percent.

The current account surplus will likely reach US$70.5 billion this year, with a trade surplus of $115 billion and a service deficit of $34 billion.

But the central bank said there are still downside risks as spreading trade protectionism and the intensifying trade spat may drag down world trade and South Korea's exports, a key economic driver of Asia's fourth-largest economy.

Also, the tightened job market does not show signs of turning around in the near future in the face of the sluggish tourism sector and ongoing corporate restructuring.

The country's unemployment rate reached 4.5 percent last month, marking the highest number among all March figures over the past 17 years. In particular, the jobless rate for young adults hit 11.6 percent.

Gov. Lee said the sharp increase in the minimum wage is not the direct reason for the poor employment data in the winter-spring season. From January, the minimum wage was increased by 16.4 percent to 7,530 won, the biggest jump in about two decades, sparking worries that small mom-and-pop stores will reduce their payrolls.

"A hike in the minimum wage may force businesses to adjust employment as part of their cost-saving efforts," the top BOK official said. "The latest slowdown in monthly employment is affected by some one-off factors, but it is too early to say that the increased minimum wage had an impact on it."

South Korea's inflation has remained low since the beginning of 2018, as the consumer prices climbed 1.3 percent on-year in the first quarter of this year, lower than the BOK's quarterly target of 1.5 percent.

Lee said the lower-than-expected inflation is driven by a slowdown in oil prices and a drop in meat and dairy product prices in the first few months of the year, as well as low utility rates.

"In the future, the consumer prices will pick up gradually in the latter half of this year on the back of rising domestic demand," he said. "In the second half, inflation will be over the mid-1 percent level. For next year, it will get closer to the target inflation of 2 percent."

He said a stronger won will help mute inflation through low imported prices, which can lead the central bank to limit room for a future rate hike.