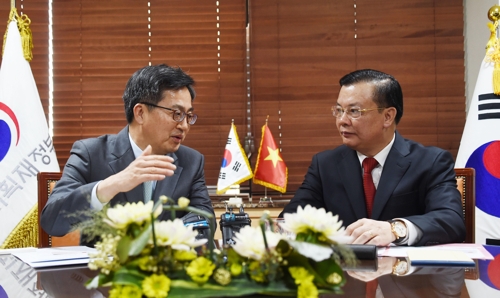 (SEOUL=Yonhap News) The economic chiefs of South Korea and Vietnam agreed Tuesday to boost economic cooperation, with the aim of raising their bilateral trade to over US$100 billion by 2020, Seoul's finance ministry said.

The Vietnamese finance minister called for more South Korean firms to take part in the privatization of state-run firms.

In a March summit between South Korean President Moon Jae-in and Vietnamese President Tran Dai Quang, the two sides agreed to work to boost their exchanges in the education, cultural, tourism and welfare sectors.

The leaders have also agreed to make joint efforts to further promote free trade in their region by accelerating negotiations for the Regional Comprehensive Economic Partnership, a multilateral free trade agreement that currently involves 16 nations, including China and all 10 member states of the Association of Southeast Asian Nations (ASEAN).