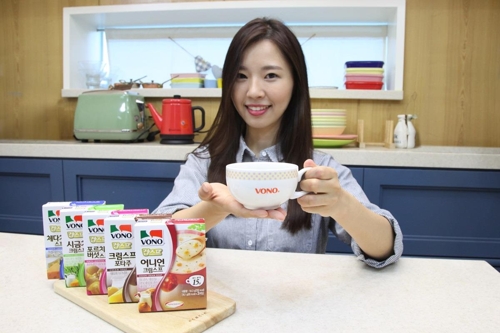 (SEOUL=Yonhap News) Nongshim Co., South Korea's top instant noodles maker, said Wednesday it will begin the construction of a factory for soup powder next month to meet the increasing demand for instant food products amid a growing number of single-person households.

Their plan is to start sales of the locally made products in August 2019.

The announcement came four months after Nongshim signed a preliminary deal with Ajinomoto to establish a production company, Ajinomoto Nongshim Foods Co., to make the instant soups. The deal involved a joint investment of 13 billion won (US$12 million).

Introduced in South Korea in 2006, Vono's sales came to 19 billion won in 2017, with its average annual growth rate reaching 30 percent in the past five years, Nongshim said.

In the first three months of this year, revenue came to 5 billion won, up 42 percent from the same period a year earlier, it said. Nongshim aims to double the revenue of Vono by 2020.

The size of South Korea's soup market is estimated to be about 58 billion won. Of the total, single-serving dry soups accounted for 44 percent as of last year, according to the Korean firm.