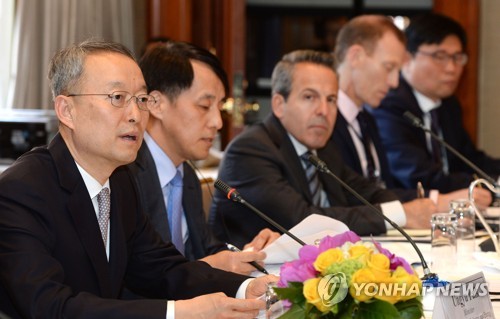 Paik Un-gyu, minister of trade, industry and energy, made the outreach efforts with American businesses during his first trip to the U.S. since taking office last year to step up the bilateral economic ties between the two nations.

During the meeting, EMP Belstar, a New York-based property management company, pledged $250 million worth of investment in South Korea, with other companies also showing interest in new investment opportunities, the ministry said.

His meeting came after Seoul and Washington last month agreed in principle on key issues to revise their six-year-old trade deal, which eased trade uncertainties between the two nations.

The agreement came against the backdrop of negotiations to get South Korea off the list of countries that will be slapped with 25 percent tariffs on steel exports to the U.S.

Paik will head to Washington, D.C. later in the day to meet with U.S. Commerce Secretary Wilbur Ross and Thomas Donohue, the president of the U.S. Chamber of Commerce, the ministry said.

New foreign investment pledged by the U.S. jumped 102.3 percent to $740 million in the first quarter of this year, led by the information and technology sector, as well as the finance sector, according to the trade ministry.