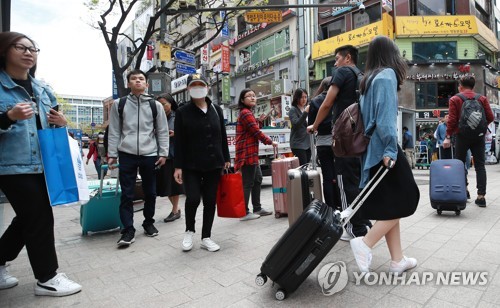 (SEOUL=Yonhap News) The number of foreigners who visited South Korea rose 10.7 percent on-year in March, ending 12 straight months of decline, data showed Monday, as the government pushes to diversify the country's tourist portfolio in the face of a plunge in the number of Chinese visitors.

The total number of inbound visitors came to 1.37 million last month, up from 1.23 million a year earlier, according to the data from the Korea Tourism Organization.

It marked the first on-year increase after the number of Chinese tourists visiting here began to tumble in March 2017 amid a diplomatic row between Seoul and Beijing over the deployment of a U.S. missile defense system in South Korea. A total of 13.3 million foreigners visited South Korea in 2017, down 22.7 percent from a year earlier.

The number of visitors from the neighboring country rose 11.8 percent on-year to 403,413 last month, according to the data.

The tourism promotion agency attributed the latest growth to the gradual improvement in ties between the two countries, as well as South Korea's efforts to attract more visitors from countries other than China.

Before the diplomatic dispute, Chinese accounted for nearly half of all visitors to South Korea.

The number of outbound South Korean nationals, meanwhile, came to 2.25 million last month, up 16.1 percent from 1.94 million a year earlier, the data showed.