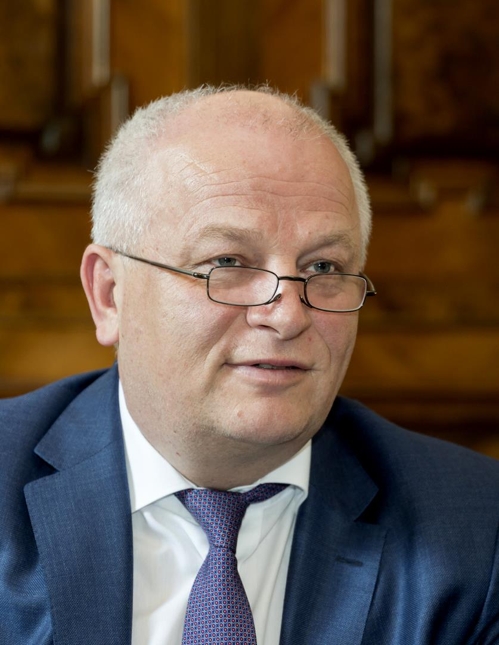 (SEOUL=Yonhap News) Ukraine wants to explore ways to expand joint projects with South Korea in the tech, infrastructure, aerospace and agricultural sectors to foster trade and investment between the two nations, its vice premier said.

Stepan Kubiv, the First Vice Prime Minister and Minister of Economic Development & Trade of Ukraine, said his government has keen interest in industrial cooperation with South Korea to revive its fragile economy following the political turmoil of 2014.

"The Ukrainian government is making efforts to create a business-friendly environment through reforms in the administration, judiciary and tax system," Kubiv said in an interview with Yonhap News Agency during his visit to Seoul on Tuesday. "I hope more Korean companies with advanced technology and experiences in overseas development projects will enter the Ukrainian market."

The vice premier made a three-day visit to South Korea, leading a delegation of senior government officials promoting new business opportunities in the Eastern European country.

While the military aspects of the conflict dominated the headlines since Ukraine ousted a Russian-backed president in February 2014, the Eastern European nation has been seeking to shift its focus to economic development by facilitating foreign investment and trade.

Ukraine is abundant in natural resources, particularly in arable land, coal and metals. The country has been among the world's leading exporters of grains, crude steel and iron ores. The country, however, suffers from very low energy efficiency mainly due to outdated industrial technologies and infrastructure.

"Ukraine has a high-level of expertise in the IT sector and aerospace, and I have discussed ways to expand cooperation in the sector in meetings with South Korean senior officials," Kubiv said. "We are interested in studying ways to adopt the advanced Korean technology in Ukraine and seek opportunities for joint projects in software, communications, data security and fintech areas."

As Kiev plans to modernize its aging infrastructure, its government is also interested in working with Korean companies to improve energy efficiency in major cities, he said.

"In meeting with Korean government and company officials, we discussed ways to adopt the smart city technology to reconstruct old cities and improve the energy system," the policymaker said.

Kubiv said his government wants to reach a deal on a visa-waiver program for Ukrainian travelers to promote tourism. The two governments' signing a memorandum of understanding on sharing Korea's development knowhow with Ukraine would also boost civilian exchanges down the road, he noted.

"Facilitating exchanges at various levels will be a good start to discuss joint business projects, which could help forge closer economic ties between the two nations," the official said.

In 2017, South Korea exported $321.7 million to Ukraine, mostly vehicles, electronic devices and chemical products, while purchasing $308.5 million worth of goods from the nation, according to the Ukrainian embassy.