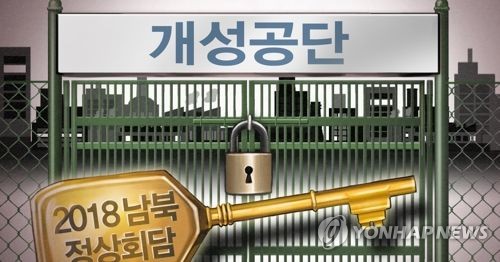 (SEOUL=Yonhap News) About a dozen South Korean businessmen who had operated factories in North Korea erupted in cheers on Friday as they watched a live broadcast of a historic handshake between the leaders of the two rival Koreas ahead of their summit.

The emotional reaction underscored expectations among the businessmen that the summit could help jump-start a long-stalled inter-Korean joint factory park in North Korea's border city of Kaesong.

"I hope that the summit could lay the foundation for the resumption of the Kaesong Industrial Complex," said Shin Han-yong, head of a private task force that speaks for all 123 South Korean firms that had operated factories in Kaesong.

The industrial park -- opened in 2004 -- had been hailed as a key symbol of economic cooperation between the rival Koreas as it combined South Korean capital and technology with cheap labor from North Korea.

Still, South Korea pulled the plug on the factory park in February 2016 to punish the North for its fourth nuclear test and a long-range rocket launch. Companies at the complex said the closure resulted in 1.5 trillion won (US$1.3 billion) in losses, but the South Korean government estimated their losses to be 786 billion won.

South Korea has said the resumption of the factory park and other cross-border cooperation projects would hinge on progress made in resolving North Korea's nuclear and missile programs.

South Korean President Moon Jae-in and North Korean leader Kim Jong-un kicked off their summit earlier in the day at the border village of Panmunjom for talks on North Korea's denuclearization.

Shin said he remains optimistic about the summit, though the Kaesong Industrial Complex and other economic issues are not on the agenda of the summit.

Separately, another association that represents mid to small-size South Korean firms called for stable conditions on the Korean Peninsula that can lead to more economic exchange with North Korea.

Kang Ho-gap, who heads the Association of High Potential Enterprises of Korea, said a tragedy like the shutdown of the inter-Korean joint factory park in North Korea should not recur.